It’s between the first day of June…to the fifteenth day of June!!!
A wonderful time a few years back, the most exciting moments use to make it more beautiful.

For a moment, just think of it all.
And try, to visualize those days…take a quick flashback!
That excitement of a new bag.
New books.
The end of an exciting vacation, with a pinch of sadness.
A bit of anxiety on the 1st day of the fresh academic year.
The unforgettable smell from the pages of new books.
New subjects.
New teachers.
New batchmates.
And the most exciting was to meet our best friends with a broad smile.
The sight of our secret ‘crush’ after a long gap 😉
The pouring rains outside.
New raincoat … new shoes!
Everything around seemed to be like a clear slate.
Lush green nature.
Pleasant climate.
Wasn’t that the most beautiful period of our life…that would never return…!!!
Just close your eyes and cherish those moments again or feel it through the eyes of your child!

Eagle Brigade Foundation is an NGO formed on 1st May 2011 to create troops from possible parts of Mumbai to serve together and create more vigilance in the society. The NGO is formed by Mr Vishvnath Biwalkar, a resident of Dombivli with a mission to serve as a Police Mitra and create awareness in youth. Youth is his primary focus, wherein he believes that after graduation also there is need to monitor the youth and make them understand the importance to serve the society as a good citizen. 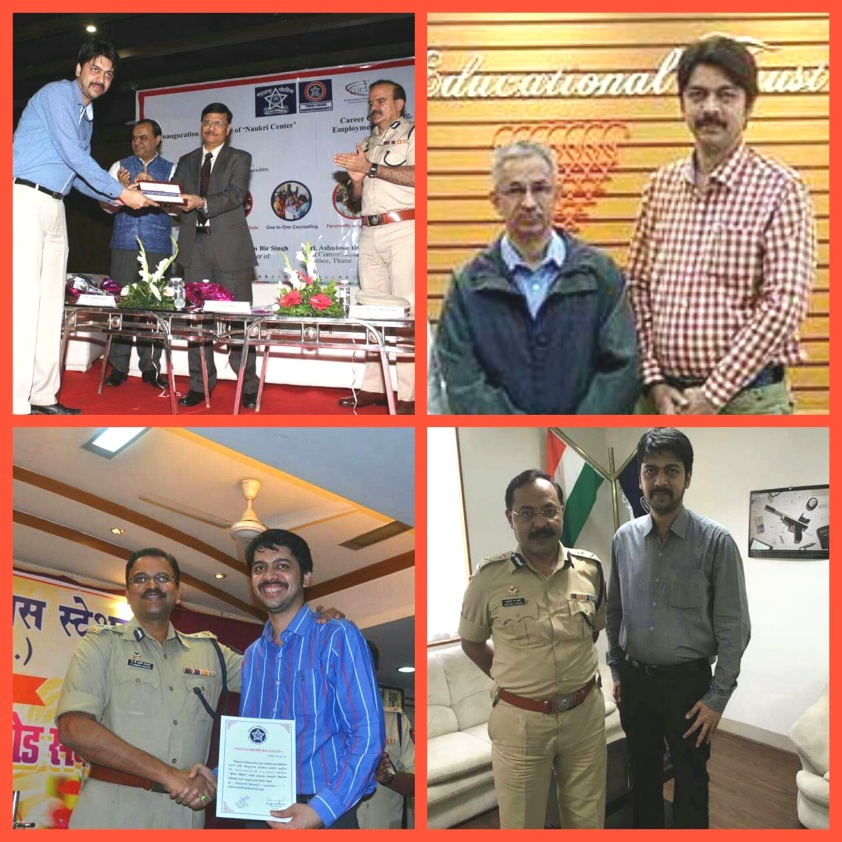 Many youths, working professionals, housewives have registered themselves as Police Mitra through Eagle Brigade and have become a volunteer to serve on various campaigns during spare time.

Various activities they perform are …

It’s indeed an achievement to create a safe world around where you stay. If there is a passion for doing something with the Police force, it is the right opportunity to join the NGO and utilise your spare time that will create positive confidence with you as well as help society.

Their work is been noticed by various media channels and is covered in articles to reach the audience. They are not looking for appreciation but need more volunteers to come forward and become Police Mitra and contribute to their cause.

Beware We are watching you! Night Patrolling by Eagle Brigade

Join them on Facebook to get more updates on campaigns!

and become a Police Mitra! 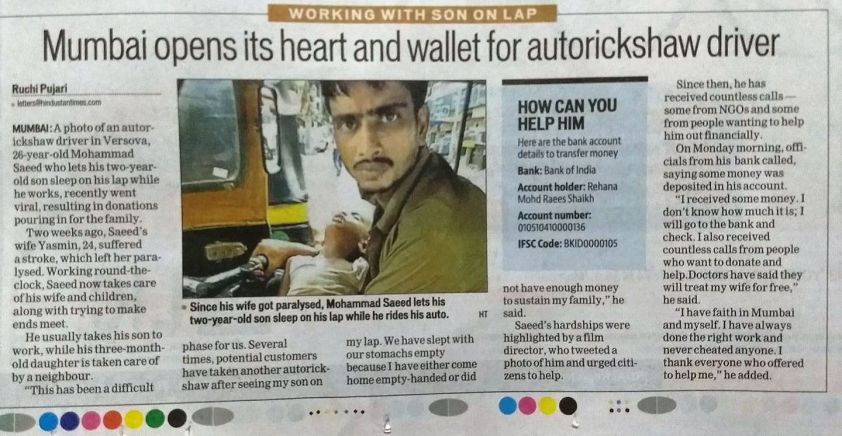 Mohammad, with a lot of positive hope and struggle, is now getting help from Mumbaikars. Mumbai is a home for many and Mumbaikars are like family members, to extend support to those in real need. Extend the possible help to the courageous man (refer the account details in the image), as sometimes a single-handed struggle is not enough and needs a support.

Mohammad never approached any media for help and was struggling on his own to achieve his positive hope of upbringing his family. No shortcuts to earn the money, is what one should learn from him. A positive approach is moral of the story that made him reach to the corners of the world through digital power today. One should never start thinking negative on life hurdles and keep on working hard. One day there would be bright rays that will remove the darkness of life.

Inspired by Mohammad’s story one should look at life very positively, in spare time should always think about key areas where one can bring change.  He earns Rs. 600 per day and pay of Rs 400 per day towards auto rent, In Rs. 200 that makes around Rs. 6000/- as his earning for a month….after working almost for 20 hrs, he kept his smile and hope intact to feed his two lovely children and paralysed wife.

Nowadays we look at many diet plans to get rid of obesity, instead of that one should read stories about such people that will create positive energies within. A strong will and a rigorous schedule with positive approach can change life and keep health in the good state too.

Today people choose to give up spare time in watching TV or playing games on mobile or chatting over messengers or apps, instead of that if they choose to look around society and give time in social work can make our living more safe and sound.

Challenges make life sturdy and are not a curse but a boon sometimes to uplift ourselves! Think Positive. Choose right path to get rid of struggle and make a happy ending.

It’s a cyber attack that involves hackers taking control of all the data files or in some cases complete computer, making it completely inaccessible until the ransom is paid. It asks the user to pay 300$  to get it back. If not paid it says it will double the ransom amount. You may find an email with attachment as “taskche.exe” and we recommend that you should not access it/download it/try to open it. Don’t open/click any suspicious links in an email. Avoid digital payments for few days. Few emails can grab your attention with topics like due payments and mislead or create a panic click, avoid/ignore if you are not sure about the sender or is not related in any case.

It has already affected high profile organisations in Spain, UK, China and other countries including India. These organisations include clinics and hospitals, telecom, gas, electricity and other utility providers. So far it’s claimed that 74+ countries are been attacked or affected.

From an individual to an organisation, the Internet is a medium for connectivity but if not used safely could be a threat, as things vanish like a magic! Those who are not much tech savvy and uses the computer for entertainment and work that relates only to email/Microsoft office then they must understand that every email is not for them and shouldn’t open unless and until it is from recognised person and organisation. Even individuals with sound software knowledge can accidentally click wrong attachments. Emails shouldn’t be taken as a task, We do many online transactions these days and have personal information saved/cached through multiple browser logins. Hence there is a need to always stay alert and secure the virtual data.

Microsoft has its own anti-virus which needs to get updated and kept active. Also, there are many anti-virus software’s available in the market that would give you alerts if you try to open any harmful site or file. It’s utmost necessary to have an anti-virus installed and active on your computer.

The Internet proves to be a quick solution but is also surrounded from thefts by hackers. Stay Alert!

We read this word now and then in newspapers and every day the victims are sentenced to death immediately, but the culprits are sentenced to life imprisonment most of the times after few years. There is no immediate action and it takes long to come to decide the punishment. Wonder why it takes so long to understand the case and come to conclusion.

It’s horrible to even think about what must a victim has gone through just for the sake of insanity by men around. In many cases, she has to give up her life. The crime is not understood until her body is found in vandalized state. Nowadays, even toddlers are victims to this insanity. Also, this doesn’t stop or is specific to girls but even boys are victimized and we read many cases about same.

We write many articles about such cases, but for whom? Those who read, are helpless too!! The concern is still not reaching to the people. The insane behavioral pattern is still not read by the society. There are a lot of articles on rape cases that gets further raped through shares but with no conclusion.

We just read about the cases and then there is no solution to it, that doesn’t provide any justice to victims nor does it makes a safe place for a human. Preventive measures are not yet planned though such acts are openly noticed by society.

Some positive creative before an adult movie is played in theaters or on radio channels or during ads in between tv shows meant for adults (without any vulgarity) should be made to educate and reach such people. The strict actions/law that will create some fear in the minds should also reach to such people through a correct medium.

An intense scene in the movie/ shows is been promoted so openly without thinking for a bit that a child who might be watching it is reaching adulthood, and if there is no one around to educate that child in a proper manner, can it lead to a crime in future?  We must not just make articles on cases to circulate within us, but come with the concrete solution to avoid such cases in future!

RAPE shouldn’t be a case to read but a word that will educate the generation in correct sense and make sure to understand it and avoid it in future. To create a stable mindset that would realize the crime.